Artificial hips have been in use for many years to replace disease and arthritis-damaged hip joints. In recent years metal-on-metal [MoM] hips became a popular option for hip replacement surgery. A MoM hip is where the natural bone ball-and-socket hip joint is replaced with a metal femoral head (ball), and a metal acetabular cup (socket). Unfortunately, many of these MoM hips are now failing at unacceptably high rates. MoM hip failure is often the result of the accumulation of metal wear debris deep within the hip joint. A failing MoM hip needs to be removed and replaced in an elective surgery called a “revision.” If you have a MoM artificial hip, you should seek the advice of an attorney who has experience with these products and their failure.  George McLaughlin is such an attorney. 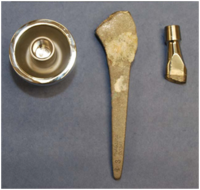 Another less well known but potentially more serious failure of some artificial hips is that the metal artificial femoral stem suddenly and unexpectedly breaks in two a few years after implantation. (see article) These fractures often occur in more active patients, despite the fact that the manufacturers of artificial hips marketed them to surgeons and patients as appropriate for patients who want to return to an active lifestyle. One such manufacturer, Wright Medical Technology, even used professional tennis star, Jimmy Connors as its spokesperson to promote its artificial hips. When an artificial  hip stem fractures emergency surgery is required to remove and replace the broken hardware.  This kind of fracture most often happens with what are called modular stems and modular femoral necks.  Removal and replacement of a fractured or broken hip stem or modular neck is not a simple surgery. Recovery may be long and painful.  Additional future surgeries may be necessary. The economic burden associated with the emergency revision surgery can be crippling, often totaling over a hundred thousand dollars. Stem and modular neck fractures are not limited to MoM hips.  These fractures also may occur with a ceramic femoral head, or a polyethylene lined artificial hip socket.  While several manufactures use a modular stem and neck design, Wright Medical Technology has promoted its Profemur® Hip System of  model hip stems and modular necks in the United States since approximately 2003.  Tens of thousands of these Profemur® modular necks have been implanted. Unfortunately, Wright Medical Technology Profemur® modular neck fractures are now occurring in unprecedented numbers. United States Food and Drug Administration (FDA) Manufacturer and User Facility Device Experience (MAUDE) database contains reports of more than two hundred Wright Medical Profemur® modular neck fractures.  www.accessdata.fda.gov/scripts/cdrh/cfdocs/cfmaude/ The neck of a modern artificial hip stem should not break.  If it does, the patient may have a claim against the manufacturer for damages. Modular neck fractures are NOT the fault of the implanting surgeon.  In fact some surgeons who implanted these devices feel they were misled by the manufacturer’s promotion of these devices, and agree that these products are defective. If you have suffered a modular neck fracture there are things that need to be done immediately to preserve the evidence, the broken hardware that the surgeon removes.  Delay in contacting an attorney may compromise your case.  If you suffered a modular neck fracture of your artificial hip, contact George McLaughlin to learn what your legal rights are.

The Cause of Modular Neck Fractures

The fracture of an artificial hip modular neck usually is the result of the combined processes of micromotion and fretting corrosion. Over time, usually several years, what begins a microscopic crack in the body of the modular neck grows. Eventfully, only a small piece of metal holds the neck together. Then, suddenly, it breaks in two. Usually, there are no symptoms or warning signs of the impending fracture of an artificial hip modular neck. There is no diagnostic test your doctor can do to determine if your modular neck is in the process of fracturing.

From George’s Interview for the Masters of the Courtroom series on ReelLawyers.com.

Unfortunately, many people who have the Wright Medical Technology Profemur® modular hip system also have the Wright Medical Conserve® femoral head (metal) attached to their Profemur® modular neck.  This Conserve® femoral head is often mated with the Wright Medical Conserve® metal cup.  Some of these people are now also experiencing the additional painful complications associated with MoM hip failure.  These complications include: Aseptic Loosening – A component of the artificial hip, typically the acetabular component, the “socket” or “cup,” becomes loose without an organic disease process or infection. Once the loosening process begins, it probably will not reverse itself, and often is cause for revision surgery.  This is one of the most common failures of a MoM hip. Osteolysis – Is dissolution of bone. In an artificial hip this may result in what was once a firmly attached cup to become loose. 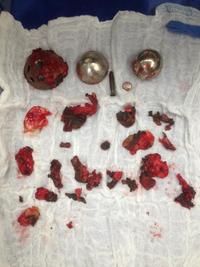 Metallosis – also known as metal poisoning, occurs when metallic debris accumulates in the body’s soft tissue. Usually, the condition refers to cobalt and chromium particles that absorb into tissue as a result of faulty metal orthopedic implants. There may be an accumulation of thick grey or brown colored fluid in the hip joint. Left untreated, this condition can result in the development of pesudotumors, tissue necrosis (death), and bone degradation. Once metallosis begins, it most likely will it will not reverse itself until the cause of the metal poisoning is removed.   ALVAL [aseptic, lymphocyte-dominated vasculitis-associated lesion] – A chronic inflammation of the tissues surrounding the hip joint.  Primary symptom is pain and may include the development of pseudotumors.  A diagnosis of ALVAL necessitates replacement of the MoM hip joint.Neurological Problems – Some patients who receive metal-on-metal artificial hips report suffering various neurological symptoms complications such as headaches, memory loss, cardiac abnormalities, and a constant presence of a metallic taste, among others.